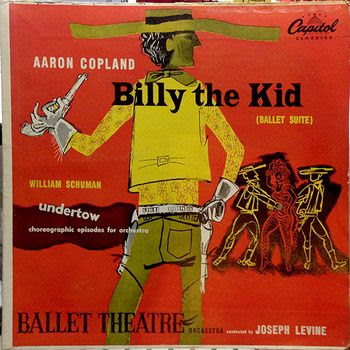 The other 50-cent album I picked up at Epping St Vinnie's, purchased, again, on the strength of the cover art, was a recording of Aaron Copland's 'Billy the Kid' - a piece of music I've heard of, but never heard. (However, everyone's heard Copland's 'Fanfare for the Common Man'; it used to be a particular favourite piece of soundtrack for certain items of bling in the Sale of the Century prize pool; it always gets cranked out for sports-related anthologies of music, even though it was designed for 'common' man rather than 'superhuman' man. While the piece was written for the Cincinatti Symphony Orchestra, conducted by Eugene Goossens - after whom a performance hall of the ABC's Sydney headquarters is named - my favourite version is by Emerson, Lake and Palmer.)

There are sleeve notes on the back - which is one of the things I love most about vinyl and even CDs over mp3s: something to read, along with artwork you can actually see, while you listen. The text for Billy the Kid provides the biographical details of Billy that are embodied in the ballet that we can't see, along with the music  we can hear. "Despite many fine qualities," we're told about Billy, "he soon developed a terrible talent for murder." Interesting turn of phrase. Turns out a townsman, Alias, fired a stray shot that killed Billy's mum, and that's what caused Billy to develop that talent of his.

The notes also tell us that the recording was made under the supervision of the composer, providing authenticity.

Frequently a 'serious music' album (on CD or vinyl) has more space than one piece of music can fill; the accompanying piece[s] are designed to complement the main one featured on the cover.

"Its tortured hero, frustrated in his infantile love for his mother, writhes through the ballet, doomed to hate the women who most attract him. The story starts with the birth of the Transgressor. The mother immediately turns back to her lover, rejecting the son. Thus the neurosis is also born."

(The record was first published in the US in 1953 - at the height of the post-war rise of psychoanalysis and the beginning of the ever-growing male identity crisis.)

Sadder still, the sleeve notes don't mention the cover artist.
But I love the cover: Billy's cowboy hat has an incredibly wide brim. The brim could almost be the work of Saul Bass - but none of the other art, to the limited experience of my untrained eye, seems to be.

Although, maybe that hand - doing gunslinger tricks with the gun - may be a precursor to the golden arm… And note it's the left hand doing the fancy gunslinging - making Billy a southpaw, artistic, not to be trusted. 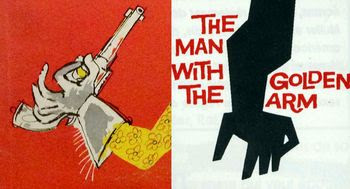 Combined with it the floral print shirt and flamboyant waistcoat, suggesting Billy's 'yeller' maybe; certainly arty. The sleeve notes have already established him as somewhat of a mama's boy. 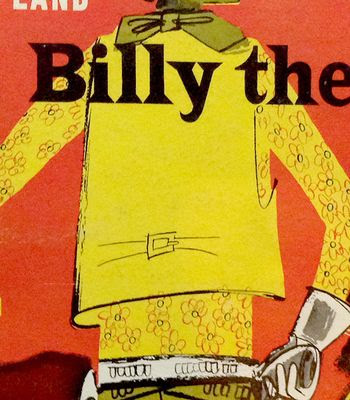 The 'crowd' is pretty cool though. It's hard to tell if it's two legal dudes holding one of Billy's floozies 'hostage' or if it's Billy's accomplices manhandling a 'tart with a heart'. 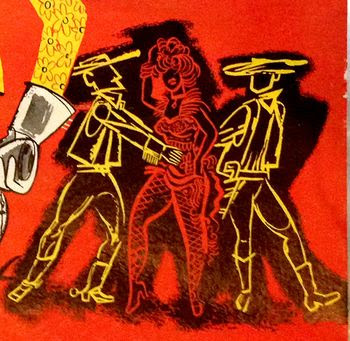 My copy is an Australian pressing, but I'm guessing an early one since it's on the purple 1950s Capitol label, and rather than naming EMI as the parent company, credits instead The Australian Record Company Ltd, 29 Bligh Street, Sydney. Rather than the US catalogue number, P-8238, it carries an Australian one: CLCX 047.

Maybe an original US pressing or a current CD pressing will carry cover art credits. Meanwhile, I'm having a hard time determining who the cover artist is. I thought perhaps the show girl's filigree might be a stylised signature - like a Hirschfeld 'Nina'. 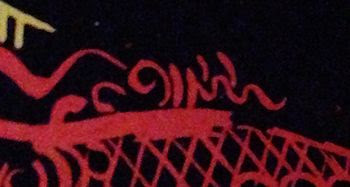 I'll be honest. I can't make out what, if anything, it says. Perhaps a Russian emigre, by the name of 'Minin'? That'd be a nice irony, given the uber-Americana embodied within the contents of the record.
I've asked the collectors and artists (and collector-artists, and indeed, artist-collectors) if they've got any ideas. None do.

My mate Simon Coates (awesome Aussie artist, currently in Canada) suggested it's Thomas B. Allen, but it turns out it isn't.
Posted by Dom Romeo at 1:29 PM