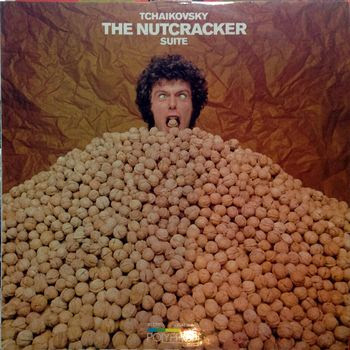 Another one of the records from the Epping St Vinnie's. Only, I liked this stupid cover enough to splash out and pay 50¢ for it.

In the first place, I'm not one to collect classical music on vinyl or otherwise. I own the odd disc (vinyl and CD) but it's down to the composer and/or performance ensemble. So there's quite a bit of 'modern' composer in my collection: Michael Nyman - and not just the Peter Greenaway soundtracks; Stravinsky - particularly the recordings he conducted or supervised; Webern because I felt like I should; stuff conducted by Pierre Boulez and Kent Nagano because they'd worked with Zappa so I felt I could trust their choices; Varese, of course, because of Zappa; heaps of Philip Glass, some John Cage and Gavin Bryars; even some Ades when he was the Next Big Thing in the serious literary mags towards the end of the last millennium - but mostly because he was my age and a celebrated genius while I was just some schmuck reading about him on public transport to soul-destroying day jobs… I never could get through a whole Ades disc.

What I do know about classical music, from a lifetime in music retail and my brother's own extensive collection, is that classical releases typically have artwork on the cover, or serious photos of the performers - either in performance, or in high quality portraits.

This record was different. It's cover was a photograph that was ironic and silly. It was on the 'Polyphon' label, of which I know nothing, except that, since the second part of the word is 'phon' rather than 'phone', it's probably European. (The Parlophone label, for example, was 'Parlophon' is non-English parts of Europe.) The rainbow motif above the name reminded me of a local cheapie classical label, 'Rainbow'. What does cheap classical label mean? Old recordings, probably not remastered, on thing vinyl pressings with not a lot of dynamics when it comes to volume or frequency range.

But I don't care: I'd never listen to it. I was buying it for the cover.
Which is awesome: crosseyed dude in a '70s perm, buried up to his head in walnuts, with one in his mouth. Get it? He's just vomited a mountain of walnuts. He's sick. He's nuts. He's crackers.And it's a recording of a popular ballet, Tchaikovsky's 'Nutcracker Suite'. 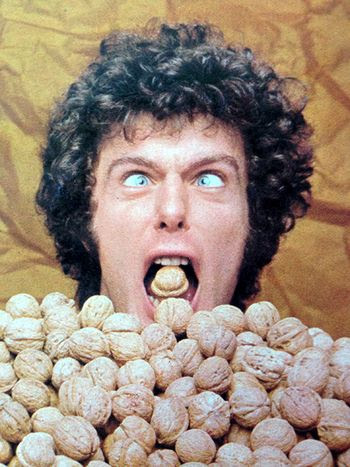 It's a 1972 recording of the Berliner Philharmonic Orchestra conducted by Ferdinand Leitner (of whom I'd never previously heard). It's distributed by  Phonogram, which by the late-'80s, would be PolyGram, the Australian distributor of Polydor and Phonogram and associated labels. (This company would eventually become the Universal Music Group conglomerate). The sleeve notes are in English, but not particularly well-written. There's a reference to Tchaikovsky bucking the nationalistic trend of his time, "prefering to follow the German symphonic tradition", but the 'p' has been left off; so he spent his career "refering to follow…".

There's some illustration crowbarred into the top of the back cover, of a mouse attacking a toy soldier, in as much space as the poorly written sleevenotes allow.

I don't know terribly much about Tchaikovsky, although Monty Python tells me he was homosexual.

Certain parts of the sketch that traces his life (a 'special episode' of 'Farming Club') makes me cringe now, but what I can say about it is Michael Palin's particularly camp arts show host is a parody of someone who dressed as flambouyantly and had as fluffy hair (and fluffy and flambouyant voice) who was presenting such programming on the BBC at the time. Don't remember his name. I've just seen him in old docos from time to time.

So I can't help but want to make a comment about the dude on the cover whose got Tchaikovsky's nuts in his mouth.


Meanwhile, comedy lovers may well be familiar with the idea of the cover. There was a very popular comedy album by Allan Sherman called My Son, the Nut. 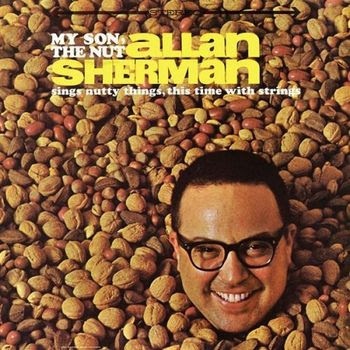 I should probably point you to Tchaikovsky's Nutcracker Suite online. Here's my favourite version of it - a musical comedy version by Spike Jones that adds lyrics to tell the story (cos you can't 'listen' to the story the ballet tells). Again, the dated material makes me cringe in some places rather than laugh.

And, to complete the post, here's Allan Sherman's My Son, the Nut. It's chock-full of foolish lyrics added to recognisable tunes and styles. Like the letter home from camp, to 'The Dance of Hours', that we now know better as 'Hello Muddah, Hello Fudduh!' (It also has 'Hail to Thee, Fat Person'.)